Academic misconduct is the violation of University policies by tampering with grades or taking part in obtaining or distributing any part of an un-administered test.

Academic misconduct may include 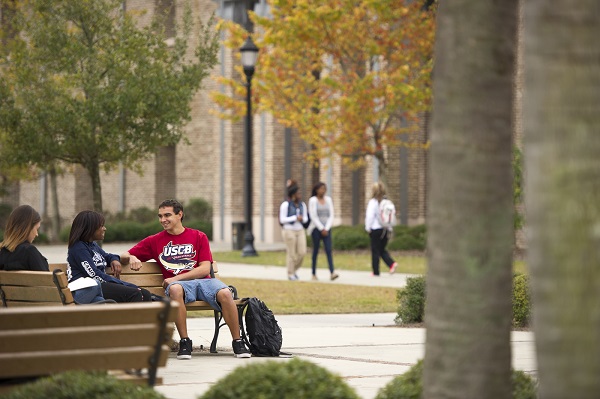 Any member of the USCB community who has reasonable grounds to believe that an infraction of the Academic Code has occurred may report the alleged violation. All individuals pressing charges may be asked to serve as witnesses or to provide information during any hearing resulting from the charges. Infractions of academic discipline should be reported in writing to the Executive Vice Chancellor for Academic Affairs. Students accused of infractions of academic honesty will be brought before an Honor Court.

A student charged with infractions will be sent written notice to appear before the Honor Court at a scheduled hearing. The notice will include:

NOTE: Advisors are not permitted to participate directly in the hearing process, or to speak for the charged student(s) or student organization(s).

A student who has violated or who has been charged with the violation of any regulation of the University may not be permitted to withdraw from the University without the permission of the Chancellor. A notation of circumstances under which the accused student was permitted to withdraw shall be entered in the minutes of the Honor Court. The withdrawal of a student with or without approval shall not deprive the Honor Court of the power to hear charges against the student. The student charged with infractions shall be present for all testimony, be permitted to call witnesses on his or her behalf, be confronted by witnesses, may question all witnesses, may testify on his or her own behalf and make statements bearing on the matter under consideration.

The Honor Court Chair will introduce the case, calling first on the individual making the charge, then on the student charged with the violation.

The involved parties and/or the court may call witnesses. The court members may question all parties who may decline to answer any or all questions. After both sides have presented their cases and all testimony has been given, the court will deliberate the case. All other participants will be requested to leave. The court will reach a decision by a majority vote. Should a tie vote occur, it will be considered as favoring the student charged. If the decision is unfavorable to the student, the court will impose sanctions according to the regulations below.

Once the court has reached a decision and imposed sanctions (if necessary), the student will be informed both in person (immediately after the decision) and in writing. The results of the hearing will be forwarded to the Executive Vice Chancellor for Academic Affairs.

The initial phase of the student appeal must take the form of a written appeal within five class days of the Honor Court decision. Within twenty class days of the receipt of the student’s request, the Executive Vice Chancellor for Academic Affairs will re-examine all materials pertaining to the case and arrive at a decision. The Executive Vice Chancellor may either approve or reverse the decision of the court, or may change the sanction.

In the interest of consistency, sanctions and penalties must be imposed as follows:

Circumstances and the severity of the violation will determine the sanction. Any or all of the following may be imposed for a first offense:

Either of the following sanctions may be imposed, effective immediately:

A third violation necessitates permanent suspension from USCB. All statements, information, or comments given during hearings will be held in strictest confidence by members of the USCB faculty, staff and witnesses before, during and after deliberation. Only duly authorized persons or faculty and staff with an educational need to know will be informed of the proceedings and outcome.

The chair of the Honor Court may make a tape recording of all judicial hearings. The charged party or parties and their advisor shall have the right, upon request, to listen to the recording in the presence of a staff member of the Office of the Executive Vice Chancellor for Academic Affairs.

The charged student may request a duplicate copy of the recording at his/her own expense within a period of six months from the date of the hearing.

After the hearing, the Executive Vice Chancellor of Academic Affairs shall be responsible for forwarding the written decision of the University Honor Court to the charged party or parties. The letter from the Honor Court shall consist of a statement of charges; findings of the hearing authority and the rationale for the findings; sanction(s) and the rationale for the sanction(s); and a statement regarding the right to appeal and the appeal procedures.

Students found responsible shall have five class days from the date the decision letter is sent to submit a written request for an appeal. If there is no appeal within this time limit, the Executive Vice Chancellor of Academic Affairs shall implement the decision.

The request for appeal shall be by memorandum addressed to the faculty chair of the Honor Court through the Executive Vice Chancellor of Academic Affairs. The memo must state the reason(s) for believing the decision of the original hearing authority to be improper.